Mathematical equations and textual contents sometimes contain a row of dots (\( \cdots\)). These dots’ meaning together is “ and so on”. These three dots refer to ellipsis points. Ellipses are exactly three dots, not less or more. In LaTeX, if you would only type a period (.) three times in a row, it will generate undesirable results such as… , In the output, those dots are too close together. In this post, we will present different types of ellipses and how they are generated in LaTeX. Examples are from math mode and text mode to master inserting ellipses in LaTeX.

Types of Ellipsis Pointers in LaTeX

The difference between the \ldots and \cdots macro of the above table is illustrated by the following examples:

Usually, low ellipsis \ldots are used between letters and commas. On the contrary, in mathematical equations, it is a common practice of using the centered ellipsis (especially between operators, operations, and relational symbols). The matrix may use vertical ellipses, sometimes diagonal ellipses.

In textual mode, you can use \ldots command to implement three sequential dots with a wider spacing. These three dots of ellipsis could refer a short interval, unfinished impression, or missing words. When users only accumulate dots, these are printed out tightly together. However, it is wise and appropriate to implement these dots broader. In the text mode, both \dots and \ldots have the same effect.

Recall that, in standard LaTeX, you have the commands \ldots and \cdots for printing ellipses points, either on the baseline or raised to the center of the line. \vdots and \ddots are used to place three dots in a vertical and diagonal positions, respectively.

The following example highlight the use of ellipses in a matrix to denote the repetition of a number (-10 in this case).

In this post, we presented different LaTeX commands of ellipses and their use in text and math mode. This includes baseline, center, vertical and diagonal ellipses.

This post is one of LaTeX math symbols series, which highlights different methods to include infinity symbols in our document. This includes simple infinity symbol, half infinity, acid free symbol...

This tutorial teaches you the simplest and clearest method to typeset square roots. You will learn how to typeset nth root, adjust root exponent position and radical symbol height. Square...

LaTeX-Tutorial provides step-by-step lessons to learn how to use LaTeX in no time. It allows you to start creating beautiful documents for your reports, books and papers through easy and simple tutorials. 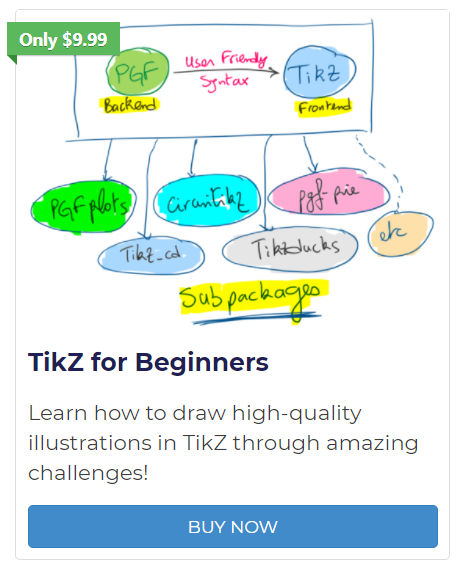